A guide to materials on globalization in the SAU Library in connection with the tenth annual College of Arts and Sciences theme, Faces of Globalization.

Databases for locating articles and books on globalization 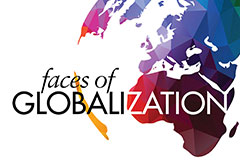 The tenth annual St. Ambrose College of Arts and Sciences theme this year is Faces of Globalization.

Globalization is often defined as the shrinking of distances among the various continents and a worldwide interconnectedness of important aspects of human life, including religion, migration, war, finance, trade, drugs, food, music, and art. Central to this theme is the belief that there is no single way to understand globalization in the 21st century.

In exploring significant perspectives on globalization, this series will deploy a variety of events highlighting differences as a way to more clearly understand the various aspects of globalization. We seek to implement the university's core mission values and guiding principles by increasing awareness of and contributions to the campus, local, regional, national and global communities.